In Memory of
Marie Olga
Vicente
1954 - 2015
Click above to light a memorial candle.
Memorial Candle Tribute From
Boardman Funeral Home
"We are honored to provide this Book of Memories to the family."
View full message >>>
Plant a Tree In Memory of Your Loved One
Click Here
Menu

In the event that there is an error
in the information presented,
please contact the funeral
home by clicking here. 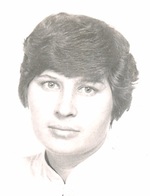 With her family by her bedside, it is with great sorrow and extreme sadness we announce the passing of Marie Vicente of Thompson, beloved wife, mother, and grandmother at the young age of 61 on Friday, February 27, 2015.

Marie was born in St. Rose, Manitoba on February 3, 1954 to Otto and Eleanor (or best known as Laura) Kraska as one of eight children. With her uncanny wit and sense of humor, Marie especially loved being with family and friends. Her many talents and hobbies included cooking, countless crafts and enjoyed being the computer genius of the family.

Marie is survived by her husband- Frank; children- Vince (Sabrina), Chad (Bobbi) of Thompson and grandchildren- Claudia, Emily and Carson. Marie is also survived by six siblings- Lorraine, Paul (Carol), Anne, Carl (Bella), Armella (Art) and Albert (Hilda) and numerous nieces and nephews, to many to mention. She was predeceased by her parents and sister Charlotte.

Marie will be dearly missed but not forgotten by many of her family and friends.

Arrangements for services will be made at a later date.

Marie's wishes were that in lieu of flowers, any friends or family who wish to make a donation in her memory be made to the Canadian Cancer Society.