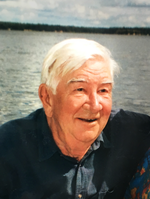 It is with sadness, the family of Forrest Melroy Hetland announces his passing in Deer Lodge in Winnipeg, MB on February 2nd, 2019.


Forrest would want to be remembered as a proud Saskatchewan farmer. Born in Naicam, Saskatchewan on August 17, 1925, he began his life long passion for farming as a member of the 4-H calf club. After attending the School of Agriculture at the University of Saskatchewan, he farmed in Naicam. During that time, he met Doris Proctor, an airline stewardess with TCA, from Newmarket Ontario on a blind date in Montreal! They married in 1951 and raised their 3 children, Betty Jane, Bill and Barbara in Saskatoon and Naicam. Forrest's farming interests led to his specialization as a seed grower and to become a founding member of the Saskatchewan Rapeseed Grower’s Association. The Hetland family won the Master Farm Family Award in 1970. His community contributions included serving as a councillor for the RM of Pleasantdale, coaching hockey and a supporter of the United Church in Naicam and Winnipeg (Westminster). His business interests included ventures in racehorses, Angus cattle and small mining companies in Saskatchewan. Hobbies included hunting, curling, tennis, playing bridge, BS poker and the odd bet on football games. His agriculture career took him to Winnipeg in 1971 when he was appointed to the Canadian Grain Commission and then the Canadian Wheat Board in 1974. His passion for selling Canadian grain around the world ended with his retirement at age 70 in 1995. He and Doris enjoyed summers at the cottage at Dorothy Lake in Whiteshell Park, tropical winter vacations and visits to Naicam, Regina and Dellwood, MN to see family.


The family wants to express sincere gratitude to all the caregivers from Rosewood and Deer Lodge, his “Sweethearts” and a special thank you to Bob and Linda Hamilton. A private family service will be held in Westminster United Church and a celebration of life and internment will be held in Naicam this summer. Details will follow.