To share your memory on the wall of Grace Bindle, sign in using one of the following options:

Print
With heavy hearts and profound sadness we announce the passing of our beloved mother, grandmother, aunt, and friend, Grace Bindle.

Born Grace Elizabeth Russell in Winnipeg on March 24, 1939, she learned to knit by age 4 growing up in Aus... Read More
With heavy hearts and profound sadness we announce the passing of our beloved mother, grandmother, aunt, and friend, Grace Bindle.

Born Grace Elizabeth Russell in Winnipeg on March 24, 1939, she learned to knit by age 4 growing up in Austin, MB. After attending teacher training in Brandon, and a brief period teaching in The Pas, Grace moved to Thompson, MB, where she met and married Otto Bindle in 1964.

In 1967, Grace started substitute teaching grades K to 8, but soon stuck to lower grades and the Special Education Classes, eventually teaching full-time kindergarten. After retiring in 1997, she continued to substitute grades K to 3 until 2017.

“Mrs. Bindle” is well known for having a special place in her heart for children. In a recent teaching memoir, she wrote “After I was diagnosed with a rare form of cancer, I miss the kids and adult colleagues. Over the years, I run into students I’ve taught or subbed and we chat. I miss them and am happy they have continued on with their education or are working here in Thompson. I am proud of all of them, knowing that I played a part in their lives and education. I’d be back in a heartbeat if I could.”

Grace always saw the best in people and met many friends throughout her travels that she loyally stayed in contact with. She cherished every moment she spent with her grandchildren, and enjoyed summers with family, friends, and neighbours at her cabin at Paint Lake.

A Celebration of Grace’s life will be held on Thursday, August 1, 2019 at 1:00 p.m. at St. James the Apostle Anglican Church, 10 Caribou Road, Thompson, MB, with “A Life Lived” reception following at Royal Canadian Legion. Future cremation interment will be at Austin Cemetery.

Memorial donations may be made to CancerCare Manitoba or Heritage North Museum.
Read Less

We encourage you to share your most beloved memories of Grace here, so that the family and other loved ones can always see it. You can upload cherished photographs, or share your favorite stories, and can even comment on those shared by others.

Posted Oct 17, 2019 at 08:58pm
Condolences to Grace’s family. I remember Grace from when I lived down the street from her and her husband in the late sixties. I remember her visiting the Jacksons where I was boarding. Grace also substituted in the school I taught in. I’m sorry to read of her passing.
Comment Share
Share via:
CG

Posted Aug 21, 2019 at 08:19pm
Our deepest sympathy to the Bndle family; Your mother Grace was the kindest person, her smile will forever be in everyone hearts. She was a favorite teacher. Our prayers go out to her family; from Cheryl (White) Graham & Tom Graham of Calgary.
Comment Share
Share via:
PW

Posted Jul 30, 2019 at 02:32pm
So sorry to hear of your moms passing. She was such a kind lady and a delight to be around. We all enjoyed our time with her in Thompson and most especially her visit with us in Newfoundland after retirement. Mom (Minnie) will certainly miss their chats on the phone. Grace kept her well informed about what was happening in Thompson since we left. Cherish the many good memories you all have of her as we will certainly do. Stay strong.

Posted Jul 29, 2019 at 10:39pm
Such wonderful memories of Grace sharing her Kindergarten materials with me and always enjoyed having many conversations in our staff room. Grace enjoyed knitting and gave the cutest ,little, woollen socks to so many new babies.What a wonderful career she had...thank you for all those years of dedication. RIP Grace💕
Comment Share
Share via:
SN

Good sons it should read apologize for the error. 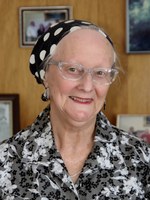 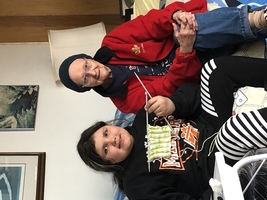