To share your memory on the wall of Howard Pitts, sign in using one of the following options:

Print
Howard Pitts , 67, of Thompson MB passed away peacefully with his family by his side on Thursday July 25, 2019 at Thompson General Hospital after a eight year battle with cancer.


Howard was born September 25, 1951 in Halifax, Nov... Read More
Howard Pitts , 67, of Thompson MB passed away peacefully with his family by his side on Thursday July 25, 2019 at Thompson General Hospital after a eight year battle with cancer.


Howard was born September 25, 1951 in Halifax, Nova Scotia. He grew up in Dartmouth, Nova Scotia where he graduated from Dartmouth High. He received his teaching degree from Dalhousie University and spent his younger years travelling and sharing his gift of knowledge until he moved to Winnipeg in the early 80's. In May of 1985 he graduated with a law degree and was called to the bar in June of 1986. He moved to Thompson MB in 1995 to practice law at Legal Aid. He met his wife Claudine in 1999 and the two were married on August 7, 2004.


Howard was a thoughtful, kind and loving man. He loved his grandchildren so much that his face would light up whenever he told them stories and shared his knowledge of life with them. Howard had such a love for the outdoors. His favorite hobbies were fishing, gardening, hunting, camping and cooking which he spent doing with the love of his life Claudine.


He was predeceased by his parents Stanley and Ethel Pitts, his sister Sharon and brother John.


Howard's family would like to acknowledge the staff at Thompson General hospital and send a special thank you for all of their support and kindness through a very difficult time.


As per Howard’s wishes cremation has taken place and a Memorial Service will be held on Tuesday, July 30th at 1:00 p.m. at the St. James the Apostle Anglican Church, 10 Caribou Road in Thompson, Mb. Officiated by Rev Jean Arthurson.

In lieu of flowers, donations can be made to the Canadian Cancer Society in Howard's name. (www.cancer.ca)
Read Less

Provide comfort for the family by sending flowers

We encourage you to share your most beloved memories of Howard here, so that the family and other loved ones can always see it. You can upload cherished photographs, or share your favorite stories, and can even comment on those shared by others.

Posted Jul 29, 2019 at 09:49pm
Our deepest condolences to Claudine and all of Howard's family. A kind, caring, and faithful man; a life well lived and now a rest well deserve. Rest in peace Howard.
"Well done, good and faithful servant!"(Matt 25:21)
Comment Share
Share via:
DD

Posted Jul 27, 2019 at 09:46pm
So sorry to hear of Howrd's Passing . Thoughts and Prayes to Claudine and his Family . Heaven has a another Angels Fly high Howard Shirley , Clyde and Roger
Comment Share
Share via:
R

Posted Jul 27, 2019 at 06:23pm
We met at our call to the bar in St. John’s Newfoundland as we both took jobs with NL Legal Aid, you in Grand Falls Windsor and me in Gander. We worked cases and even once were opposing counsel, in the NL Supreme Court. You left to Thompson and a few years later I joined you at the offices of Manitoba Legal Aid where you were the Director. You taught me how to hunt, where I shot my first quail. You took me ice fishing, where you caught all the fish and I caught none. I enjoyed your good company and hospitality. Thanks for the memories. Posted Jul 27, 2019 at 04:12pm
Howard , you have been one in a million in our lives . Claudine sure accepted a blessing when she agreed to go for that first coffee with you.
For many years we all were blessed to have you in our family.
Thank you for the many beautiful memories you've left us with .
You will forever be in our hearts and memories .
Rest easy and don't be arguing over any politics with my our Dad
( smile )
Treen Ellsworth
Comment Share
Share via: 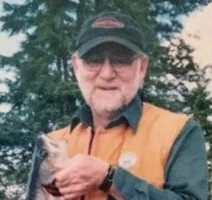 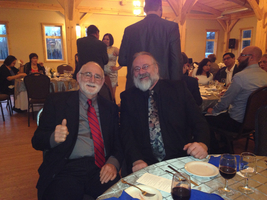