To share your memory on the wall of James Brown, sign in using one of the following options:

Jim worked at Vale/Inco over 30 years and retired last year. Jim completed his dream of adventuring Alaska with his camper after retirement. Jim’s retirement gift from his son, David James was NFL football tickets to his favorite team, Dallas Cowboys in Texas.

Jim told a young David James that he would love to receive NFL tickets when he retired. Over 10 years later, Jim was amazed his Son remembered. Jim was so excited in Texas he maxed out his data sending pictures to his friends and family throughout his trip. Ironically, Jim later complained about his phone bill when he returned home.

Jim was a beloved father to his son, David James, and a brother to his sister, Heather, and an uncle/great uncle to Heather’s son and his kids.

Please join us in a celebration of life at The Royal Canadian Legion on October 19, 2019 from 2 - 5 pm. Please wear your favorite football jersey when attending (optional).
Read Less

We encourage you to share your most beloved memories of James here, so that the family and other loved ones can always see it. You can upload cherished photographs, or share your favorite stories, and can even comment on those shared by others.

Posted Oct 21, 2019 at 03:08pm
We had an instant connection, I knew I could trust him right away and he never proved that wrong. He was a good influence for my boys and a great father to our son David. I know he was so proud of the young man he has become. We had some good times and adventures together and a lot of laughs, great memories. Gone too soon Jim but never forgotten. Rest In Peace good man.
Lynn Brown
Comment Share
Share via:
B

Posted Oct 18, 2019 at 09:59pm
Rest In Peace to the gentle giant Jim. Just want to say Thank you for being a part of my life. You helped my mum raise us brats and we are all the better for having known you. David's turned out to be a fine young man and I know you were proud of your boy. So much comes to mind when I reminisce. From your quirky hat collection to your signature application of hand lotion. I'm reminded of you taking us outside city limits to dig our own clay. Introducing us to ice fishing, my first football game (Go Argos!) First stock car races and the unique way you would play Wonderboy ("Flicking the game controller doesn't help him jump Jim!"). Most of all I think of your great sense of humour. One of my favourite movies is "A Fish Called Wanda" and that's because of you. As a child I didn't get what was so funny but as an adult I can't watch it without thinking of your knee slapping guffaws. So great! I am so saddened to know you are gone. Sorry we lost touch Wish we had one last chat as it would be really enlightening to hear your outlook on the world. Hope this one gets posted because the last one I wrote didn't.

Posted Oct 12, 2019 at 02:47pm
We will continue with our memories of all the fun we have had with Jim. Sitting around the campsite at Wekusko Falls. Can't say how many stories were true or a little fabricated over a few drinks, but it added to all the fun we had together. Each year we had to purchase something in hopes it would be better than what Jim would buy. Kind of like ..... keeping up with the Browns. So many more memories I could share, but space is short, as life was for Jim. He will be dearly missed. Our deepest condolences to David. He was very proud of you, David, and spoke of you often. Take care and keep in touch. Russ and Nancy Wester 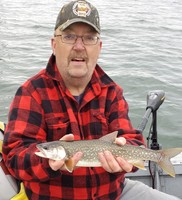