To share your memory on the wall of Donald Taylor, sign in using one of the following options:

Duke felt that by far his greatest accomplishment was seeing his first great grandson born. He proudly told everyone that he was so fortunate to still be here to experience this joy as this was a first for his side of the family.

His love for Lynn was personified with each milestone in life. Each step-in life, each accomplishment of his children and grandchildren brought him great joy. He might not have always said it to their faces, but he loved fiercely and would beam about them to his friends and family for hours.

Duke was born November 25th, 1940 in Ottawa Ontario. He was known for his quick wit and was always ready with a sarcastic joke to make you smile. His teasing was immeasurable and his laugh was contagious and filled the room.

He loved talking about growing up in Ontario and later attending Thompson Academy on Martha’s Vineyard. Duke held various jobs over the years but the time spent working for Manitoba Hydro and later driving semi were above all his most favourite. Another one of what he considered his greatest achievements was serving as President of Branch 244 of the Royal Canadian Legion. His circle of friends at the Legion could be found regularly ensconced at table 9 – these friendships he treasured right up to the last of his days.

Duke loved the outdoors and participated in many things like stockcar racing, snowmobiling, curling and fishing. His love for the lake was paramount and the time he and the family spent at the “cabin” were the best – he constantly had a smile on his face when there.

Cremation has taken place. In accordance with Duke’s wishes there will be no funeral. A gathering of family and friends will be held on Saturday, October 19th from 1 – 3 at the Boardman Funeral Home….. and this summer plans are being made for a celebration of life event which will take place at Paint Lake. Further information on this will be advised when arrangements are completed.

The family would like to extend their sincere and grateful thanks to the staff of Thompson Fire and Ambulance Service, the Emergency Services Department and the doctors and nurses on the 2nd floor at Thompson General Hospital for the care and compassion given to Duke.

We encourage you to share your most beloved memories of Donald here, so that the family and other loved ones can always see it. You can upload cherished photographs, or share your favorite stories, and can even comment on those shared by others.

Posted Oct 18, 2019 at 09:47am
Lynn I wish I could be with you to give you a hug and hold you tight, have been thinking of you constantly since your call on Thursday morning. My thoughts go to James, Rebecca, Donann and their families also.
Love you Lynn, Diana
Comment Share
Share via: 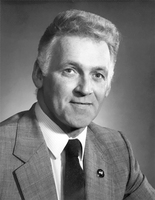