To share your memory on the wall of Vince Doucet, sign in using one of the following options:

Print
With great sadness we announce the peaceful passing of Vince, at the age of 76 at the Thompson General Hospital on Sunday, November 10, 2019.

Vince is survived by his wife Lynda, his children Michael, Debbie (Kelly), Michele, Dawn (Graha... Read More
With great sadness we announce the peaceful passing of Vince, at the age of 76 at the Thompson General Hospital on Sunday, November 10, 2019.

Vince is survived by his sister Carol Draper (Jerry) and family, sister in-law Lonnie Doucet and family.
Predeceased by his brother Edward and parents Peter and Edith Doucet.

Vince was born in Galt (Cambridge) Ontario in 1943. He lived and attended school in Brantford. He later moved to Sudbury to start his career as a miner for INCO. In 1973 he moved to Thompson and continued working for the company until retirement after 34 years of employment. He later was employed part time at the Coop Gas Bar for 10 years.
Vince enjoyed fishing, woodworking, photography, family vacations and socializing. He also enjoyed time with his little dog Buddy.

As per his wishes cremation has taken place and a Celebration of Life will be held on Saturday, November 16 as a Come and Go from 1:00-4:00 at the Royal Canadian Legion lounge.

The family would like to thank the Homecare workers who provided assistance.
Read Less

We encourage you to share your most beloved memories of Vince here, so that the family and other loved ones can always see it. You can upload cherished photographs, or share your favorite stories, and can even comment on those shared by others.

Posted Nov 12, 2019 at 10:56pm
Dear Debbie, Michelle & family. I was saddened to hear of Viince's passing. My sincere condolences to all. You are in my thoughts - sending big hugs.
Comment Share
Share via:
BM

Posted Nov 12, 2019 at 09:52pm
Linda, Debbie, Michelle and families I’m so sorry to hear of Vince’s passing. I had the pleasure of working with Vince at the Thompson Gas Bar Co-op and shared many a laugh with him. Rest In Peace Vince. You will be missed.
Comment Share
Share via:
CB

Linda and family, Sorry to hear of Vince’s passing. He was our friend and co- worker, and was liked by everyone he worked with. He used to tell stories that were always funny. There is a tree in the middle of the two apartment buildings we can see from the store, he told people that he planted the tree and it was his some people believed him. Now when we look at the tree it reminds us of Vince and how he made us laugh. He will be missed by all of us at the co-op. RIP Vince The co-op family 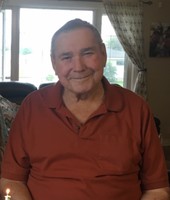