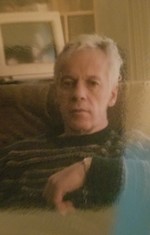 Dad was born on March 8, 1950 in Minitonas, Manitoba to Marjorie Boushie and Warner Cleavley. Growing up dad had helped take care of his mom who had MS. Later, he moved to Ontario and lived with his sister while he finished high school. After graduating, dad started working different jobs and even at one point joined the army, but soon realized that was not for him.

In 1971 dad took a job at Inco in Sudbury and in 1973 moved to Thompson and began working at Inco here. His passion was to become a mechanic so over time he fulfilled his dream and became a heavy duty mechanic. In November of 1973 he met mom and six months later went to Newfoundland to get married. There he stayed for 6 short months working as a Janitor, unhappy with life in Newfoundland dad phoned his old boss at Inco in Thompson and got his job back. And there he stayed until he retired in 2005.

Dad didn’t have an easy life but he tried to make the best of it. Dad loved his girls unconditionally, even when they pushed him to his limit. When his grandsons came along his world changed, he was so proud, he always had pictures of them in his wallet and talked about them every given chance, he was the male figure for most of their young lives and all he wanted was to see them do well in their lives. Nothing they did would make him love them any less, they were his boys. Then when his grand daughter came along, he didn’t get much time with her but when he did he cherished it. He always asked how she was doing and his eyes always lit up when her name was spoken.

In 2007, dad was diagnosed with Parkinson’s and Dementia. By 2010 dad started getting worse but when he lost Jackie in March of 2011 he really started to decline. In November 2011 dad moved to Nelson House nursing home for 7 long months and then June 2012 we got the call that Thompson had a bed for him. When he moved to Northern Spirit Manor he was not happy in the beginning and at one point signal handedly jumped a fence trying to escape. But then he grew to love it and loved the staff as they became his family.

Unfortunately, Dementia decided it was time to let dad rest and so on November 27, 2019 at 5:03pm, with his wife, daughter, grandsons and son in-law by his side, dad took his last breath. He will be sorely missed by his family and the people who knew and loved him.

Dad was predeceased by his parents Marjorie and Warner, brother Jack, sisters Jean, Donna and Violet and daughter Jacqueline.

I’d like to thank Northern Spriit Manor and the staff for all they did for my dad and Kristyn and Rhoda for keeping me up to date on dads progress after I moved. To all the friends and family that supported us with food and places to sleep and a Caesar. Carol, I have an extra special thank you for going out of your way to do baking for the boys and being there for Mom and I. Dad was the most amazing man and had the cutest smirk with the best humor.

“My Dad”
My dad is a man like no other. He nurtured me, taught me, dressed me, fought for me, held me, shouted at me, kissed me, but most importantly loved me unconditionally. There are not enough words I can say to describe just how important my dad was to me and what a powerful influence he continues to be. I love you dad.