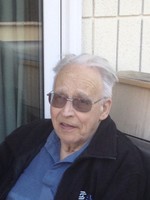 Verghl was predeceased by his parents Gilmore and Gladys and his sisters Marilyn and Esther.

Verghl leaves to mourn his daughter Dallas and son Spencer, Brother Carl as well as 4 grandchildren, 12 great grandchildren, and many nieces, nephews, cousins and friends.

Cremation has taken place and a Celebration of Life will be held at a later date in the summer.

In lieu of flowers, donations may be made to a charity of your choice.