Obituary for Stan "The Man" Martinkowski 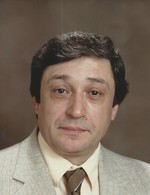 Peacefully, after a lengthy illness, at the Thompson General Hospital on Saturday, January 25th, with family by his side, Mr. Stanley Michael Martinkowski passed away at the age of 80 years.

Stan was born, raised and went to school in Kamsack, Saskatchewan where he excelled at sports and was a whiz at math. He moved to Thompson and started employment with Inco in 1960 at the age of 20, where he continued on to become a top bonus maker and eventually a Shift Boss; retiring in 1992.
He spent much of his time with Todd, attending to Todd’s hockey, dirt biking, snowmobiling, vehicles and repairing all of the above.

A Celebration of Life will be held at a later date, check www.boardmanfh.com for updated information.

In lieu of flowers, if friends so desire, donations may be made to the Canadian Cancer Society in Stans memory at www.cancer.ca .