To share your memory on the wall of Emily Hanson, sign in using one of the following options:

She may not have worked out of the home but was always busy and found ways to help others. Emily moved to Thompson in 1979 due to her daughter having to come here for school, and Oscar’s failing health. When Oscar passed away in 1982, she lived by herself until moving in with her daughter in 1997, where she then lived until having to go into a Personal Care Home in 2012.

Dementia stole a lot from Emily when it came to memories and abilities, but it did not take her quick wit, her stubbornness, and her motherly love. She was always more worried about someone else and whether they were hungry, tired or cold. She was known at the Home for always saying “You work too hard. Come and sit down for a while.” Emily will be missed by many family members and friends.

Emily is predeceased by her parents, Sarah and Robert, brothers, Sandy and Kenneth, sisters, Jocella and Helen, Her first husband, Hilmer, and her second husband Oscar.

We encourage you to share your most beloved memories of Emily here, so that the family and other loved ones can always see it. You can upload cherished photographs, or share your favorite stories, and can even comment on those shared by others.

Posted May 01, 2020 at 12:02am
Lloyd and Ann-Margaret, I am sorry for the loss of your mother. She had a long eventful life. I remember when she and Ann-Margaret would come to visit in Thompson on Centennial Drive East. The difference in Dooley's height and her height just took me by such surprize. She was a very nice lady. Take Care and Stay Safe - and of course sincere condolences and gentle compassion to all her family and those she held dear and those who hold her dear.
Comment Share
Share via:
M

Posted Feb 28, 2020 at 12:24am
Annie I am so sorry that your mom has passed away. One thing I know for sure is that she must have been an amazing mom to have raised such an amazing, kind daughter. My love to you and your family❤️
Comment Share
Share via: 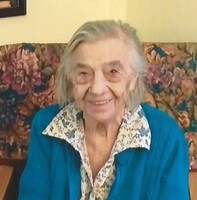