To share your memory on the wall of Virginia Fortin, sign in using one of the following options:

Print
It is with great sadness that we announce the sudden passing of our beloved Mother, Grandmother and Great Grandmother.

Virginia will be missed by her four children: Linda (Maarten Gerritsen) Eric (Claudine Latuilippe) Keith (Evelyn) and... Read More
It is with great sadness that we announce the sudden passing of our beloved Mother, Grandmother and Great Grandmother.

Mom was born in Winnipeg and lived there until the age of 14 when her family moved to Churchill.

When she was nine, she made the most important decision of her life, she asked Jesus into her heart! Faith was important to her.

In 1956 Mom attended Success Business College then she moved back to Churchill and was hired by the Department of National Defense working in Engineering Services.

In 1969, our family moved to Thompson. Mark was born in 1971, and my parents planted a tree in the front yard for him! We attended the Thompson Bible Chapel under Continental Mission. My mom was an excellent homemaker, besides taking care of the children, she made homemade meals, baked cakes, bread, cinnamon buns but pies were her specialty! She was the queen of pie making and made excellent crusts!

In 1975, our family moved to South Indian Lake. Mom took courses learning how to run the water and sewage treatment plants. She continued her faithfulness to the Lord, cared for her home, worked, baked, loved us!

In 1981 mom moved back to Thompson and got a job with the School District of Mystery Lake as an Attendance Officer. She helped many families whose children were missing or late to school. Sometimes the simplest solution was purchasing them an alarm clock out of her own pocket or taking a child for breakfast before taking them to school. Others were more difficult and meant getting a court order for a drinking family member to not come home. A school board decision in 1992 chose to pass the responsibilities from an Attendance Officer, to the school principals. Mom then transitioned into the classroom as an Educational Assistant.

At this same time, mom became a KTC house parent. Over the years she had many young people in her home. She endeavoured to live Christ and share Him, in hopes that it would make an eternal impression on them and they would also want to have Christ in their lives.

When I had my plane crash mom was very blessed to have an understanding boss like Clayton Tompkins and so was I as mom was able to be in Winnipeg with me.

Mom enjoyed travelling! She visited the United States, The Netherlands several times, France, and Belgium.
Mom worked for Home Care for ten years retiring at the age of 76! She loved those she worked with and felt useful!

When mom finally “retired” she kept busy. She loved to go sit in the mall selling Christian books and giving away Indian Life magazine. She would go to coffee shops with friends and give out Christian tracts to those who might be open to hearing the gospel.

Mom had a difficult life, she had many struggles, as we all do but she handled them with grace as a true Christian. If you want to get a picture of my mother, please read Proverbs 31:10-31.

Midway Bible Camp was an important and integral part of our lives during the summers growing up. My first time going to camp, I was three. Mom went to help in the kitchen. The importance of those summers to my Christian Life and foundation are something I will always cherish.

Because of our long history with Continental Mission and Midway Bible Camp, I am asking that In lieu of flowers, donations be made in her memory to Midway Bible Camp: 151 Deerwood Drive Thompson, MB R8N 1E4

Thank you to Dr. El Sebaie, her GP to Drs’. Anid, Wong, Abarra, Mahmoud, and Dr. Abou-khamis. Thank you to the nurses and staff at the Thompson General for caring for mom in her last week of life. A special “Thank you” to Amelia the Footcare nurse who cared so much for mom and squeezed her in before restrictions took over. Thank you to Angela, Cherish, Jane and Marcia at Home Care.

Cremation has taken place and a Memorial Service will be held on Saturday, September 5th, 2020 at the Thompson Pentecostal Assembly, 126 Goldeye Crescent, at 2:00pm
Read Less

We encourage you to share your most beloved memories of Virginia here, so that the family and other loved ones can always see it. You can upload cherished photographs, or share your favorite stories, and can even comment on those shared by others.

Posted Jun 04, 2020 at 12:54am
Linda please accept my mom's condolences for the loss of your mom. She was sad to hear of her passing and gives you a hug. My mom is thinking of you and all your family at this difficult time. When my brother told me about your mom I read the beautiful obituary that shows your mom was a true blessing to this world. May she rest in peace in Jesus hands. With love Ellen Sagriotis and
Family.

Posted Jun 03, 2020 at 05:52pm
We are sorry to hear from your loss. Condolences from us to you, Linda & Maarten. We met your mom/ mother in law in Holland and we learned to know her as a respectful woman with a great faith. We can understand that the loss is enormous for you. We pray that you may get strength from 1Thes4:14-18.
In His love, Jan & Adelheid Manni from Zwijndrecht - The Netherlands

Posted Jun 03, 2020 at 04:31pm
I had the pleasure of meeting Virgina, while I was living in Thompson. She was an inspiration to me, and her faith was unwavering. Virigina was a very kind woman and you felt the warmth in her presence. To Linda and her brothers, I send my sympathy greetings.-From Marlene B.
Comment Share
Share via:
B

Posted Jun 02, 2020 at 06:12pm
I have many good memories of Virginia & family, when my husband and I first went up to Churchill to live, we lived in the Mission house next door to Linda’s family. They were kind and good neighbours to us, Linda was only about three at the time.
Virginia planned a first surprise baby shower for me in her home when I was expecting our first son, very special of her to do that !
She was also a good singer and sang in a trio and was on the local TV program that our church had. She loved the Lord and shared her faith with others. Love you Virginia ❤️ !
Bessie
Comment Share
Share via:

Posted Jun 01, 2020 at 04:14pm
Hi Virginia! I only met you one time and felt honored that I could see you. Even for a short time, you were so sweet and kind. Thanks for leaving behind the wonderful lady, Linda. We will miss you!
Comment Share
Share via: 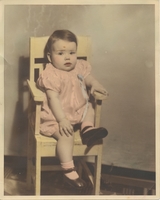 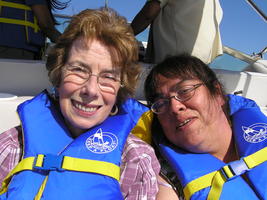 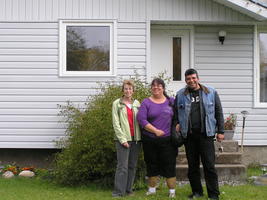