To share your memory on the wall of John Linklater, sign in using one of the following options:

He was raised by Angus Linklater (grandfather) on the Burntwood River near Snow Lake for three years. He also lived in Puk and Grandville Lake.
John love... Read More
John was born at St. Anthony's Hospital in The Pas Man on September 24, 1971.

He was raised by Angus Linklater (grandfather) on the Burntwood River near Snow Lake for three years. He also lived in Puk and Grandville Lake.
John loved being outdoors and his passion for mother earth showed through his actions.

He was a very easy going guy and accumulated a lot of close friends. He had a heart of an eagle which he always wore on his hat. Whenever you met him, friend or a total stranger he always had something kind to say or even a joke to laugh about. He would always put a smile on your face. His mode of transportation was with his own two feet ( I'm going to highjak as he would say). He was quite a story teller where he would tell you about his many journeys.

He loved his children with all his heart we knew this by his constant stories of his children's antics. His love for his family and his many friends shined Bright on his face when he would see you. He was always heard saying "I will give you my shirt off my back" that was the kind of person he was. John had many friends and family that he respected wholeheartedly. John took such such good care of his mother Elizabeth, his specialities were cooking his famous bannock and wild food. He was also on an episode of Cooking with the Wolfman in A.P.T.N. He was beside himself that he made it to the final stage of the cooking competition.

He was also featured along with his bro Ernest Castel and a few other family members on CBC Man. When the winter storm of the century hit the north with full force. They were travelling on highway 391when they became stranded. We believe that this was the one time our brother couldn't walk out of. His mother, friends and family will miss him dearly.

We encourage you to share your most beloved memories of John here, so that the family and other loved ones can always see it. You can upload cherished photographs, or share your favorite stories, and can even comment on those shared by others. 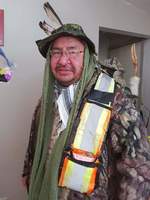