To share your memory on the wall of Elinor Shaw, sign in using one of the following options:

Print
Elinor Joan Shaw, age 78, passed away peacefully in the early hours of June 16, 2020 at the Thompson General Hospital.

Elinor was born to the late Steve and Pauline Staranchuk in Nipawin, Saskatchewan in 1941. When she was still a s... Read More
Elinor Joan Shaw, age 78, passed away peacefully in the early hours of June 16, 2020 at the Thompson General Hospital.

Elinor was born to the late Steve and Pauline Staranchuk in Nipawin, Saskatchewan in 1941. When she was still a small child the family moved to Flin Flon, Manitoba where they settled. In 1958 she married the love of her life, Conrad Bruce Shaw. They had many adventures together such as camping with their children all over Canada from east to west. Elinor really enjoyed travelling. Later, in 1975 they had the opportunity to move to Indonesia to work for Inco. They spent almost 10 years there before returning to Thompson. Being a social butterfly, Elinor enjoyed being in the North with her many friends. She also enjoyed their home in Mafeking where she would garden and visit with friends.

Cremation has taken place and funeral arrangements will be made at a later date. Following a funeral in Thompson, interment of ashes will take place in a small graveside ceremony in Mafeking, Manitoba. In lieu of flowers, the family asks for donations to the Canadian Cancer Society (www.cancer.ca).
Read Less

Print
Service to be held at a later date

We encourage you to share your most beloved memories of Elinor here, so that the family and other loved ones can always see it. You can upload cherished photographs, or share your favorite stories, and can even comment on those shared by others.

Plant a Tree in Memory of Elinor
Plant a tree 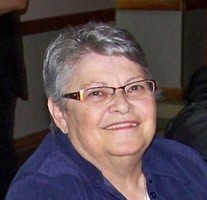