To share your memory on the wall of Doreen Asplund, sign in using one of the following options:

Print
We announce the passing of Doreen Leslie Asplund on April 14, 2021, 18 days short of her 90th birthday.

Doreen was the first-born of Bernard and Annie Giesbrecht of Lowe Farm in the Morris Municipality, Morris, MB. She was one of 11 chil... Read More
We announce the passing of Doreen Leslie Asplund on April 14, 2021, 18 days short of her 90th birthday.

Doreen was the first-born of Bernard and Annie Giesbrecht of Lowe Farm in the Morris Municipality, Morris, MB. She was one of 11 children. In her teenage years she took a sewing course in Steinbach, MB and used that info extensively throughout her life!!

Doreen worked at Eatons in Wpg. She met her future husband Carl Asplund in Wpg and moved to Thompson in early ‘60’s to open the Thompson Music Studio. Besides taking in boarders she did custom sewing!! She has lived there most of the time since then.

Doreen lived independently for many years, finding comfort in the North while enjoying all her activities! She will be remembered for her beautiful sewing, knitting, crocheting and many crafts for craft sales. Everyone in Thompson must have special oven mitts and oven door hand towels! Quiet Books were a big hit, many of which she sent far and wide!!

Doreen is survived by her grandsons, David(Britney) and Michael(Karla) and great grandchildren Alexa Dueck and Addison Asplund as well as David and Michael’s mother, Donnelda(Ron Sokol).

Special thanks to Homecare, Social Services, Palliative care and all the staff at Thompson General Hospital.

At Doreen’s request cremation has taken place with internment at a later date!!

Life is precious!! In Doreen’s memory take time to connect with Family and Friends!!

Another Angel has got her wings!

We encourage you to share your most beloved memories of Doreen here, so that the family and other loved ones can always see it. You can upload cherished photographs, or share your favorite stories, and can even comment on those shared by others.

Plant a Tree in Memory of Doreen
Plant a tree 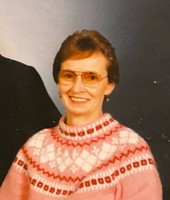